Stereo Assassin’s “new enemy” – a “group of trolls called The Joy of Satan. 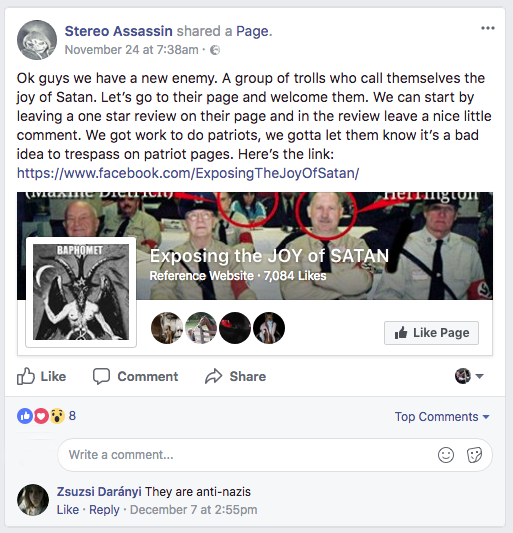 The Joy of Satan is unaware of their new publicity man, but he’s out there on social media, making sure everyone knows about the JoS and their love of…Trump? Yes, “Stereo Assassin” has ‘joined forces’ with the kids of Joy of Satan, as a “white man” and “proud patriot” he wants the entire world to know, HE is the voice for all and his music is the music of Father Satan. Also known as Enki. When applicable. When he isn’t high on drugs or rambling repeatedly about the same shit due to massive head injuries sustained after dozens of beatings for being a complete douchebag at clubs, bars and anywhere in the nightlife scene in the past 25+ years, he is walking around his town, smoking and yelling into his cell phone. Supposedly, this guy is “using again,” so he was a drug addict in his 20’s and 30’s, and he’s back on dope again. He’s gotten his ass kicked in so many times that his head isn’t quite right. He’s mentally around age 13, chronologically he’s going on 53. He’s a perfect fit for Joy of Satan, don’t you all agree?

You can find “Stereo Assassin,” aka Kevin M Caputo, on many social sites. He spends most of his days and nights on Facebook and Instagram, but he does use Twitter also. He loves attention, good or bad, so if you feel the feels for giving this retarded “devil/satan tattooed” loser a piece of your mind, he is @stereoassassin666 on Instagram and facebook.com/stereoassassin/
Twitter: @STEREOASSASSIN

We have some great pics of him thinking he’s trolling “Antifa trolls” and/or “libtards” but in all actuality, he’s just posting hilariously ignorant and uninformed nonsense to the Exposing the JOY of SATAN Facebook Page.

He has ranted repeatedly that he is “trolling the Joy of Satan” but in the same rant he’ll say he was a Satanist or he agrees with JoS philosophies such as white pride and white supremacy, white privilege and his disgust for other races. He’s against race-mixing. He seems to wish to collude with JoS to expand his “fan base” and gather more likes and follows.

Nothing this deranged, loopy maniac says actually makes any sense, but then again, look at him…what would one expect from a man-child buffoon that loves Trump, is trying to get cancer and gets off sexually on making abusive, harassing comments or threats to most users online, both men and women?

We have no idea why he came to EtJOS on Facebook, but he thinks WE are Joy of Satan so he asks users to review our page (LMAO) and in return, he’ll give you, for free OMFG, a song from his horrible crap he calls music. He just lays shit and noise over other people’s music.

We totally fucked him over, so he’s gone now, but we want Joy of Satan to know that this monkey ass thinks he’s battling with THE Joy of Satan. NOT us…the JoS! This is your new fan, Joy of Satan! HoodedPenis and Mageson can deal with this loser; surely they’ll send their little army of emo kids to attack this “enemy!” 😀

He got what he had coming to him. Right now, as of this moment, he is miserable. He thought we were just “a group of Antifa trolls” and that he was the reason for our existence. Now he has found out that you don’t mess with Exposing the JOY of SATAN. He’s depressed, he’s physically and mentally wrecked and he had it coming to him.

ORLY? We can all get the “always crying, always upset” part…after all, she had to deal with a bully and predator and she was not happy with his behavior at all. She also had to deal with his use of her personal profile to post — he forced her to give her login and password and he often posted to his personal profile and to his “Stereo Assassin” Page as her. It was never her. He did the same in his group, “Wicked Music for Wicked People.”
Hey! Fostar Child joined the group not knowing he joined a retarded moron’s group of flying monkeys.

In case you still question this man-child’s mentality, here is a recent photo of Haley.
Most obviously not on drugs or 40 pounds larger than she was in November of 2017.

Again, this is what he said about her in January:

His cat is DEAD. He doesn’t deserve to have any cats. Cat people on Long Island aren’t too happy about his “situation” with all those cats so things will happen…
He chain smokes and that smoke is so dangerous to animals, dogs, cats, any pets you might have—Kevin smoked indoors, one after another and the cat left. Soon they will all leave and not return because cats get lung cancer too easily from second-hand smoke. Stereo Assassin can make a song about how cigarettes made Dennis leave him. His bonus song will be “Who Rehomed All My Cats WTF *spits stutters*” and you’ll get it free for leaving a good review on facebook.com/bornwrongrwcordings/ and this blatantly racist label that claims they “signed” this trolling cyberbully: https://www.facebook.com/Cataclysm-Records-332213217185911/
Like Kevin always says, go leave a 1-star review.

Back to the facts.

I think most users who visit this blog site know exactly what we stand for and do. We cannot have monkeyboys like this wanna-be old has-been loser trying to take the focus away from what Exposing the Joy of Satan’s mission is. We post the facts about the Nazi hate group and cult titled “The Joy of Satan” which is an online-only cult.

So, a “Big Big Big Win” to him is when a group shuts his mouth. LOL
We took away his voice and he thinks he won. Why are we giving him airplay right now? To help those who can see what a fuckboy he is, do what he does to others — he puts it out, let it all come back to him tenfold.

This is the Trump dick sucker Kevin Caputo of Oceanside NY trying to post here over and over:

EtJOS never had a YouTube channel, therefore, we are not worried or concerned about your rants over something we had no part of.

This is what happens when you are so desperate you pretend to be a Hell’s Angels member threatening someone random online. See you at the Hempstead, NY hangout, Kevin. LOL NOT! Your weak and scared ass would never dare…

Sorry Kevin. We never had a YouTube channel and we never will.

Kevin, your IQ must be below 100. For the 100th time, we EXPOSE a HATE GROUP that is pro-Nazi and hates Jews. Can you grasp this or do you need the EZ-Reader version?

Kevin, learn to read. Learn to comprehend what you read. Anti-Semitism is the opposite of the information we give out via this blog and our Facebook page, so why are you claiming we are anti-Semitic? If anyone is a Nazi-loving Hilterhead, it’s you, buddy.

ORLY? So according to this email, Bobby Gustafson from OVERKILL emailed this blog and made a vague threat, Caputo-style. Not buying it, Kevin. Nope.

WE have never had a YouTube Channel and never will.
All of these emails were from the same user. All used the same device(s). We use tracking and tracing here. Kevin Caputo tried to leave two comments to the blog and both matched these email sources.

As a group of people who research the Nazi cult group “Joy of Satan” and expose their connection to Nazism and anti-Semitic hate groups, we are NOT ‘Antifa’ or any political group and we are surely not Neo-Nazis or anti-Semitic as Kevin Caputo states repeatedly to “his fans” otherwise known as “his flock of morons.”

We are a small group of people, and yes, there is a Satanist amongst us. EtJOS was created years ago, so there is NO connection to this clown whatsoever. We have never served as a source to post anything about this small-minded little man, regardless of his delusions that we did and that Exposing the Joy of Satan was created solely to “harass” him, the poor victim crying wolf. EtJOS serves one main purpose and we have made that explicitly clear time and time again.

Even his “fans” are retarded. Not one has had an education.

He makes fun of Transgendered people all the time. He thinks the #metoo
hashtag was a “liberal joke” and made fun of it for weeks.

Smoking as usual, this was a video he made about finding out there is a WordPress blog about him. “To,” Kevin.
Too, two, to. Learn your words, numbskull.

Nope! But we all “missed” all those videos you deleted that came up on other sites. Why pretend you were offline for days when you already left a digital footprint, dumbass?

*Cough cough* (coughs up a chunk of lung, no big deal)

Dumbest clown you’ll ever hear, we promise you.

Check out those…hmm. I think they’re supposed to be Satanic tattoos.
There’s more, they’re bad, they’re funny. You have to watch a video from when he had his shirt open. Make fun of him on his Instagram or Twitter for these badly done tats. Who would put such utter crap on their body? 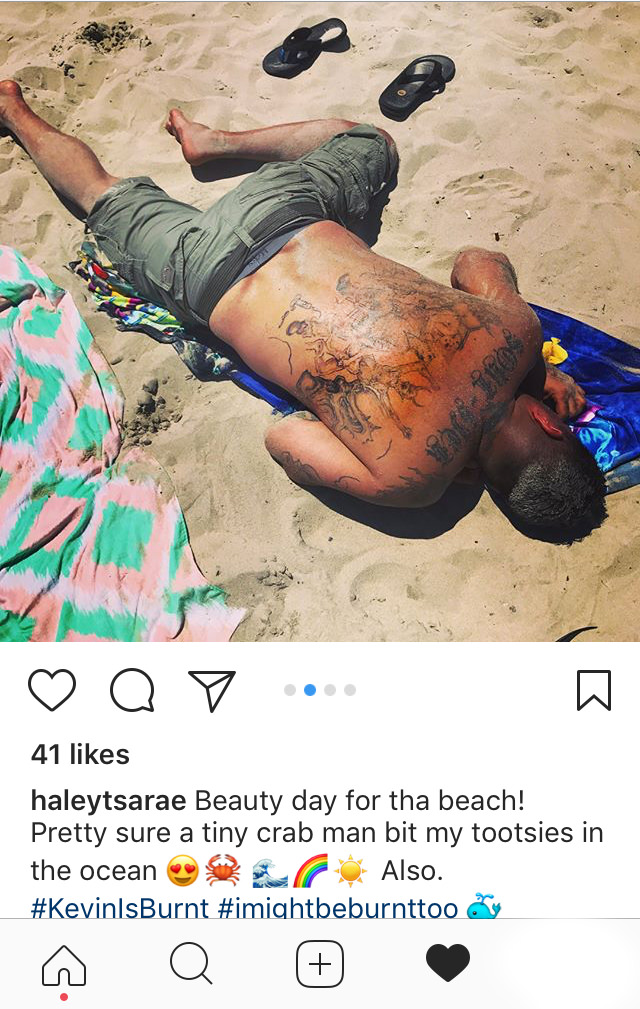 Those tattoos tho’
Look at the devil with horns and a pitchfork…oh crap, no, that’s his arm LMAO, it’s longer than the other one if both arms were straight. Check out the crispy old man and LOL

This video is HILARIOUS. He claims EtJOS privately messaged him and BEGGED him to stop leaving 1-star reviews! Not only that, he claims that uses were messaged too and told the police would be called for posting on Facebook! “They’re telling me I’m gonna be arrested, and they’re telling you you’re gonna be arrested… …can you imagine the cops coming to your house? …can you imagine that bullshit?! *cough hack* I’m telling my fans to leave a 1-star review!”

Fucking CLOWN! He had to take his own review section because he was slammed with 1-star reviews. He is such a small little man that he had to make a video and lie about the situation. This is a 52-year-old and he feels he needs to lie because he’s so insecure and mentally unstable.

And after sending numerous threats via email to this blog, and faking emails along with using his own name, he sends an email begging us to take this all down because he claims it’s ruining his social life. FUCK YOU BUDDY. You started it, you harassed us, you sent users to harass us and the point of EtJOS is to expose a pro-Nazi hate group, not to “entertain” you and your 10 friends, so fuck off. You got what you asked for already. Own your bad behavior, big shot.